The United States, Mexico and Canada concluded negotiations on the United States-Mexico-Canada Agreement (USMCA) on December 10th, with the deal expected to be ratified by each country’s legislation in coming months. Dairy producers are among the largest potential beneficiaries of the USMCA, which would eliminate Canada’s Class 7 milk pricing scheme while expanding U.S. access to the Canadian dairy market. Canadian skim milk powder export volumes increased significantly throughout 2017, aided by the introduction of the newly created Class 7 milk pricing scheme used to price skim milk powder, milk protein concentrate and infant formula. The Class 7 milk pricing scheme priced the products at the lower of skim milk powder or whole milk powder prices observed throughout major dairy exporting regions, effectively guaranteeing that Canadian product will always be competitive globally. Under the USMCA, Canadian skim milk powder, milk protein concentrate and infant formula will be priced at U.S. nonfat dry milk price levels instead of the lowest of prices experienced throughout the major dairy exporting regions. Under the USMCA, the Canadian Class 7 milk class must be eliminated six months after the agreement is signed into order. In addition to abolishing Canada’s Class 7 milk class, the United States-Mexico-Canada Agreement also provides the U.S. producers with access to approximately 3.6% of Canada’s dairy market under a tariff-free quota, up from the existing level of approximately 1.0%. Mexico and Canada combined to import more than $2.0 billion in American dairy products throughout 2018, accounting for a 37% market share of total U.S. dairy exports over the period. The value of U.S. dairy exports destined to Mexico and Canada has increased 8.9% on a YOY basis throughout the first ten months of 2019, outpacing the 3.1% YOY increase in the value of U.S. dairy exports destined to all other countries over the same period. 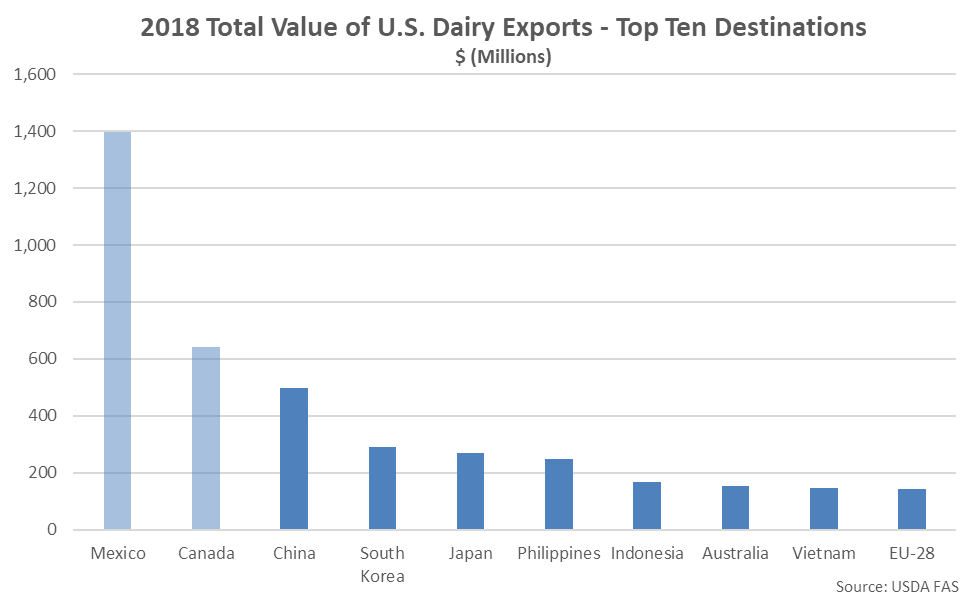 Looking ahead, the House could vote as soon as December 19th to ratify the deal, but the Senate won’t take it up until early next year. Mexico’s legislature is expected to sign off on the revised pact in the coming days, but Canada’s Parliament likely won’t introduce legislation to ratify the agreement until convening on January 27th.
U.S. Dairy Commercial Disappearance Update – Dec ’19
Dairy WASDE Update – Dec ’19
Dairy
Ethanol
Livestock
Grain